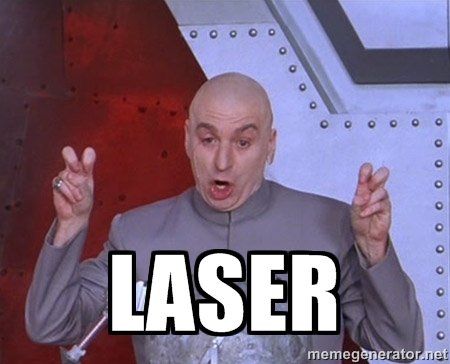 In today’s hi-tech world, lasers can be said without using air quotes and mimicking Doctor Evil’s voice. The use of lasers in both commercial and private use sectors are on the rise, indeed in no other span of time has the use of lasers been more prevalent than in the last 10 years. As the technology has become more developed, the size of the devices has decreased. This combined with the decreasing cost of parts and materials has put many laser systems within reach of most commercial and personal consumers.

The laser systems of today are almost unrecognizable in their ability to engrave, mark or etch, then their predecessors of yesteryear. The commercial and industrial space has definitely benefited from this technological boon as companies in the space are now able to expand their capabilities and product sets. Here are 10 ways that modern laser systems are used today.

Perhaps one of the more iconic uses of lasers. Wood engraving used to rely on the hands and know how of a seasoned veteran of the craft and his array of tools. Today all you need is the imagination to generate a design, some sort of software to turn that idea into a 3D computer rendering, a computer to run the software and a laser system to burn that design into the wood. Once again, laser technology is modernizing and democratizing a traditionally manual process. Creating 3D designs on crystal and glass used to rely on a sandblaster in the meticulous hands of an artist or craftsman. These days laser etching is not only a more efficient means of getting a design on glass and crystal, but it is often more cost effective. Using lasers to engrave on stone and slate has done away with a mason spending hour after painstaking hour chiseling away at some gargantuan slab of rock and praying with all their might that they do not hit it so hard that it cracks. With lasers, engraving stone and slate has never been easier. No matter the medium, the process remains the same, and that means that variables like the density of the medium or the grain of the stone can be more closely monitored. In this example, lasers are used to make a clear yet subtle, sometimes shallow mark on the plastic. Words can be basically imprinted on the plastic, such as company names, product warnings and barcodes. Is perhaps one of the more popular uses of laser engravers in the market. A surprising number of products are made from aluminum, from smartphone cases to car parts to jewelry and memorabilia. Using lasers allows for highly detailed designs to be placed on these items. For those that don’t know, anodized metal is a tough substance. It must withstand corrosion and mechanical forces. The metal has been treated to be durable as possible and this makes things like marking and engraving particularly difficult. However, since the power output of a laser system can be adjusted, an etching can easily be made on the surface of the anodized metal without compromising its considerable durability or ability to resist corrosion. Unbeknownst to most people, real gold is malleable and is actually difficult to work with. Even experience jewelers still take caution when they have to work on gold as they neither want to affect the design nor do they want to accidentally shave off some of the material, thereby decreasing the net worth of the item. Laser engraving ensures that designs are not only placed on the gold item with the utmost accuracy and precision, but also that material loss during fabrication is kept to the absolute minimum.

RELATED  38 Brilliant Quotes for Hiring Managers to Live By Metal is of course more dense than plastic and requires a significant amount more power. However, you could never tell the difference due to the precision of the results. Titles, words and names can be marked on metals as well as barcodes and other figures. Tools and instruments of engineering are considered precision tools and devices. Their very existence has been predicated on this fact. It is therefore essential that they be handled with care and respect, lest their accuracy and performance are compromised. The use of a laser engraver ensures that the design is safely engraved onto the tool without harming the integrity of the tool. To say that electronics components, such as chips and motherboards, are fragile is an understatement. A mere scratch or misaligned pin may mean that the entire circuit board has now been turned into a green paper weight. But, by using the fine elegance of laser etching machines, accuracy and precision can be preserved without sacrificing the time it would have taken for the task to be performed by hand, by several highly skilled professionals. And because we can, here’s one totally evil application of lasers. No sharks were harmed in the making of this video, because they’re on the endangered species list obviously. Thank you to Erryn Deane, digital business manager for The Needham Group of companies, for this guest post. Erryn has a wealth of knowledge in laser marking systems, amongst many other things, and he has decades of experience in online development, business analysis and management. In his spare time, he likes to find out how things work and looks to improve them, from vehicles to electronics or even musical instruments.