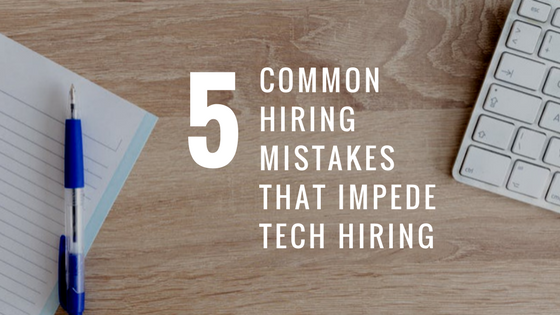 Technology is driving just about every company today. It’s no longer just software companies that are looking for talented tech talent – and as a result the demand for those with strong tech skills is higher than ever before. According to a recent survey by Indeed, 90% of respondents said it was challenging to find and hire tech workers. On top of this, 83% of those that responded claimed the tech shortage was hurting business through lost revenue, slower product development and/or increased employee burnout.

As a hiring manager, making key hires is absolutely essential because not having the right staff on your team can not only lead to critical system failures but can also have negative effects on a company’s bottom line.

A few days ago, I was trying to place an order through an online retailer– and received an error message. Thinking I was doing something wrong, I called the company, and the frantic employee on the other end informed me their system was down and wasn’t sure how long it would be to come back up.  I went and made my purchase elsewhere.  And I’m certain I wasn’t the only customer who did this and who may hesitate to buy from the site again.

The point is that technology is critical in today’s business world and when you can’t make the hires you need when you need them, things can go spectacularly wrong. Although there’s no guarantee that great candidate will take your offer, here are some common hiring mistakes that can negatively affect your hiring success.

One of the most common complaints from interviewing for a new role is simply the process taking too long. The best talent is often off the market in a few days – and if your hiring process takes 3 weeks, chances are the best candidates will have a number of offers before you can even get them through the process. If you want to hire the best, it’s best to move quickly!

Another big issue candidates have with interviewing is not getting timely feedback. If you want to secure a great hire, you need to keep them engaged – otherwise they’ll think you’re not interested. Believe me, playing hard to get has no place in hiring – if you’re interested in hiring the best talent, make sure they’re getting regular updates. Don’t forget that no update is still an update – if you’re waiting for feedback from a hiring manager that’s out of the office, let the candidate know the reason for the delay.

The best tech talent in the market has options, and many hiring managers and companies are still trapped in the thinking that the market is employer-driven.  They’re surprised when a job ad for a developer is met with just a few applicants, compared to the hundreds that might flood in for other openings. The worst offense of this is having certain benchmarks be met before a hire can be made, such as requiring there be at least three candidates invited to an in-person before a hire is made. With the competitive nature of tech hiring, if you like a candidate and they meet your requirements, don’t wait to make an offer. Some hiring managers have even gone to making offers to candidates on the spot at the end of the on-site interview to avoid losing talent.

Having a process is important – but there is a big difference between a process and an obstacle course. A typical process might be having a candidate fill out forms online or do online assessments. Both are fairly easy and can be done after-hours and don’t impede with a candidate’s current role if they have one. An obstacle is something that is difficult to complete – like requiring a candidate only fax in forms or having to go to a testing center which has limited hours.

Only being concerned with what a candidate can offer you

Some hiring companies and managers are unfamiliar with the difference between passive and active candidates. An active candidate is looking for a new role due to being out of work or wanting to leave their current role. A passive candidate is content with their role, however, is open to hearing about something that might advance their career.

If you’re interviewing both passive and active candidates the exact same way, it will be very tough to actually secure passive talent. And with active talent likely having multiple offers, overall a tech interview is no longer just an opportunity to learn what a candidate can bring to your team; you also need to get a candidate interested and excited to join your company. Questions like “why should we consider you as a candidate for this role” can be off-putting to both passive candidates that were specifically recruited for the role and for active seekers. Instead, focus on what the candidate is looking to accomplish in their career and how this move can help them meet their goals.

What common hiring mistakes have you encountered in your career search that gave you second thoughts?