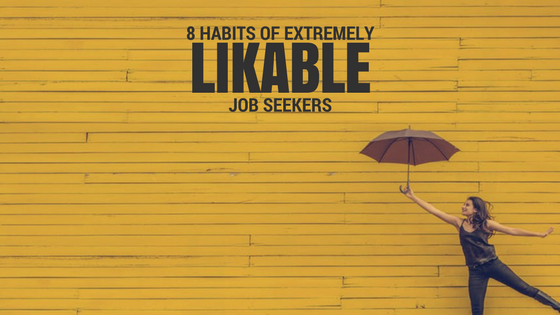 Contrary to popular belief, being likable isn’t a trait you’re born with. Like any good habit, developing a likable personality takes repeated effort until it starts to become second nature. Although some people might just naturally seem to have an easier time being likable, chances are they’ve made a conscious effort to improve themselves in a positive way. It’s also important to remember that your likability isn’t a constant – it can vary depending on your mood, external factors and how you present yourself.

On the same note, interview skills are also a developed skill – no one was born with expertise on how to succeed in an interview. Many people go into an interview with the belief that they need to prove they are the most qualified for the job. The problem is that even the most qualified person lacking likability won’t get the role. Instead, the candidate that has the best mix of likability and skills will be the last candidate standing at the offer stage.

If you were a stock image, you would want to be this guy. I mean look at him, everyone is just so happy to be around him, that’s how likable he is. Maybe he just shared about his epic weekend, brought in donuts and coffee for the entire sales team, AND just saved 7 kittens and 30 kids from a burning school bus. All without having to wear a tie. Be more like him in an interview.

Since you can’t change your core skills, the best way to prepare for an interview is to brush up on your soft skills – which include your likability. Here are a few of my top tips I share with my candidates before they interview:

Have an opinion you can communicate effectively: Surprisingly enough, most people don’t want to hire a mini-me. They want to hire someone with their own unique opinions, thoughts and experiences. However, hiring managers also don’t want to deal with a combative person who thinks their opinion is the best opinion. Instead, they want someone on their team that can bring fresh new ideas while also being able to logically give reasons behind their ideas. You think one software development methodology is better than another? Why? Give an example of how you saw something work better in a previous position, especially if it saved time or money, then ask for their own personal observations about the methodologies in question and have a discussion. Having a backbone is awesome, but also being able to have a conversation, listen to other ideas and independently evaluate options is even better – especially if it means choosing an option you didn’t suggest. This approach won’t just make you seem likable – you’ll also gain the respect of a potential future boss.

Don’t be a parrot: Most hiring managers aren’t interested in hiring a parrot. Job-seekers are often passed over for being too agreeable – which in an interview setting comes across as insincere at best and unlikable at worst. Instead of offering agreeable responses, it’s better to ask a question. Adding the phrase “I’m curious” also is advisable to make any question seem less confrontational. A hiring manager comments on his favorite framework? Rather than readily agreeing the framework is great (even if you think it is), try “I’m curious, why do you consider that to be the best framework?” Challenging an interviewer to really think about things in a constructive way rather than just parroting back what you think they want to hear, will set you apart from the crowd.

Share your personality: Everyone enjoys to work and interact with colleagues they like. It’s impossible for a potential boss to get a feel for your personality if you keep it under wraps. That being said, it’s important to keep it professional. Swearing, lewd comments or jokes, or anything else that you would not normally do within a workplace should not be done during an interview.

Be Authentic: Humans are very good at reading emotions, both from visual and verbal cues. You should always add in a few smiles on phone interviews as it comes through in your voice; in-person interviews are trickier as fake smiling can be more off-putting than endearing. Some people view interviews as a serious matter and come into them with that somber approach, which results in a pass for being unlikable.

Banter/Commiserate: This is another tricky tip as it works to a certain extent. You want to be careful not to voice any complaints about anything too specific that an interviewer may not be able to relate to, while also not complaining about anything that a potential boss may find off-putting. If you’re asked how you’re doing, instead of a boring “good”, it might be better to say something like “I’d be doing a lot better if the Dolphins weren’t losing so badly this year!” or “Fantastic, now that I’ve finally gotten my coffee in this morning.” How was the drive to the in-person interview? Sure, you could say it was “fine” through gritted teeth, but let’s be honest, “Driving through the rain is my least favorite thing, but I avoided a couple of people that seemed intent on hitting me, so I’d say it was a win.” It’s important to always show your positivity, no matter what you might be discussing.

Get Personal: Do you want to be job seeker Dave who’s looking for a new C# programming job or Dave who has 2 young kids, rock climbs on the weekend, makes killer cappuccinos for the office and happens to be a C# wizard? Use the “how was your weekend” question to make an impression, instead of boring them with the typical “Oh, it wasn’t too bad”. Would you say that on a first date? Hopefully not, because you realize they care more about learning about you than getting a canned reply. I’d rather hire the guy that says “My weekend? Oh, it was fantastic, took my daughters, Kelly and Abby out on a little rock climbing weekend, Kelly made it the top in the first try, so you’re looking at a proud dad. Laid back on Sunday and worked on some side development projects and had a couple of my famous cappuccinos – I make those on Fridays at my current job and hoping to keep the tradition alive wherever I end up. How was your weekend?” See how Dave ended with a question? Interviews are a two-way street, and a meaningful conversation can’t happen if you keep putting up dead end signs.

Maintain Eye Contact: Maintaining appropriate eye contact should be an obvious thing for most people, however, if you’re lacking confidence, it can reflect in poor eye contact. Mock interviewing might be a good avenue to beef up in this department.

Use Their Name: People like others that use their name in conversation. For most positions, except for assistant or junior roles, first names are appropriate, however, if you’re uncertain, start with Ms/Mr and if they invite you to use their first name, do it!