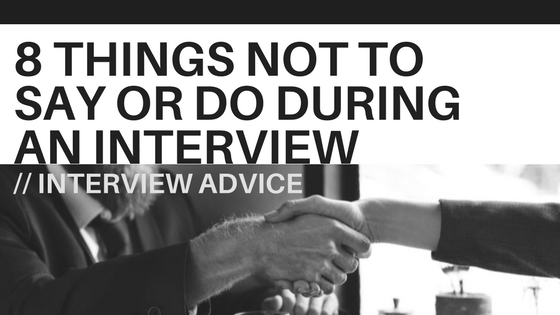 First impressions happen once and the interview is your opportunity to impress and be impressed. However, there are certain things you can say or do during an interview that might seem benign but that can backfire.

This sounds so basic, but even the most senior applicants sometimes underestimate the time it will take to get to an interview, not thinking about things like traffic, travel from parking garage to other buildings and arrive late.  So make sure you build in extra time to arrive not only on time but in the right state of mind for this important meeting.  And if you’ve done everything within your control and will still arrive late, call your recruiter or hiring manager in advance of your scheduled time regarding your late arrival and with a good reason (like an unforeseen traffic accident).

Don’t be too Casual

Even if the person you are interviewing with becomes casual, it’s important that you always remember that you are in a job interview and need to remain professional.  We once had an issue with an excellent candidate that hit it off with the hiring manager so much that he felt it’d be OK to ask abaout getting together for happy hour some time during the interview.   This person was not hired for this reason.

Interviews can make some people nervous.  However, it’s important to stray away from “the pause that repulses” with a lot of responses including “umm” or “hmm” during a conversation. Practice by both slowing down your language and giving yourself a moment to think about a challenging question with a “That’s an interesting question, I’ve never been asked that before.  Let me think about it for a quick second.” Another strategy to allow yourself a moment to think about a question without using filler is to repeat the question back. “The most difficult challenge I’ve ever faced in a work environment? Let me think of a couple of examples.”

Even for hiring managers that may be OK with cursing, it’s always advisable to avoid unprofessional language and profanity including phrases that might be considered offensive like “oh my god”. Other non-professional language can be colloquial language like “yeah” or “cool”. It’s also important not to use generic language – be specific – saying “I did a lot of things in my last job” doesn’t sound as professional as “I had a lot of responsibilities in my last position”. Keep in mind that many interviews are simply an attempt to see how you might interact in their environment and potentially as a representative of their company. Always keep your language and communication professional, even if the interviewer isn’t.

Refrain from Negative comments about past Employers

There’s a question that is almost guaranteed to come up in an interview: why are you leaving/why did you leave your last employer? Although it’s tempting to want to share a lot of details and possibly even ways you were mistreated, the best approach is professionalism and neutrality.

Honesty is always important; however, it is perfectly fine to give an abbreviated version of the story in a neutral light. Never overshare. Even if the company was losing money and management turned into a nightmare and you were happy when your entire team was laid-off, there’s no reason to give any additional details besides telling your potential future employer you were laid-off due to budget cuts.  It’s truthful, accurate and most importantly neutral.

Questions vs Judgements about the Company work Environment

Many companies are very proud of their work environment. Some have adopted an open-office plan while others might be more contemporary. No matter what the environment looks like and what your initial reaction might be, it’s best to keep comments to yourself – unless they’re positive. Sure, your first thought in an open-office plan might be how you’d get any work done with all the noise, but instead of saying “wow, I couldn’t get any work done with this noise!” perhaps instead ask “are there any quiet spaces in the office for those that need a bit of seclusion?” By rephrasing your comment into a question, you’re also able to better determine for yourself if this company offers a work culture that you would enjoy.

That you don’t have any questions

The end of the interview roles along and the interviewer asks the very typical “do you have any questions?” Even if you asked questions throughout the interview, you should at least have one question prepared for this. My favorite: “Yes, based on our conversation, how do you feel my background aligns with your need?” If the feedback is positive, “I’m happy to hear that – what will be the next steps moving forward?” These questions are a great way to get feedback immediately from your interviewer and allows you the opportunity to correct any assumptions they might have made. It also shows that you’re a confident job seeker – someone that isn’t afraid of hearing potentially tough feedback directly.

There’s a fine line between being confident and cocky, and using humblebragging during an interview is actually a worse offense than outright bragging. It’s true. In an experiment conducted at Harvard, researchers asked 122 college students to answer the question “what’s your biggest weakness” as if they were in a job interview. This question is often seen as a trick question: should I give a true weakness (i.e. I’m not always the best with time management) and not get the job, or should I give a “humblebrag” weakness (I’m too much of a perfectionist I can sometimes take longer to get things done) and get the job? The end results? 75% of participants used some form of humblebragging, with the most common being “a perfectionist, working too hard, being too nice, and being too honest.” However, the reviewers deciding on whether or not they’d hire based on responses were much less likely to hire a humblebragger, compared to an honest answer. Keep this in mind for your next interview – humblebragging is something to avoid.

Often employment circles can be small and perhaps the person you’re interviewing with may have connections in common. An interview is not the place to share or ask for gossip – however tempting it might be. It’s perfectly ok to build camaraderie through discussing mutual connections, hobbies or interests – but make sure to keep it positive.

What are your personal tips for interview etiquette?