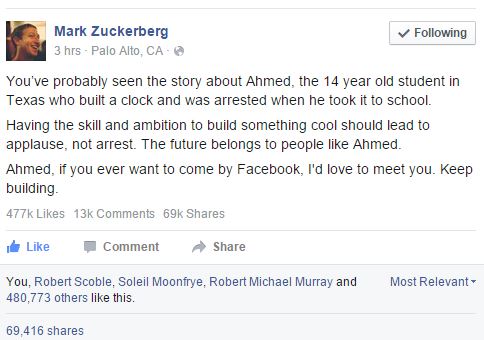 What happens when a 9th grader builds a clock and brings it to school? In the case of 14 year old Ahmed Mohamed, you get arrested.

By now, you’ve likely heard about this young tech genius being arrested for bringing the clock to school. “They arrested me and they told me that I committed the crime of a hoax bomb, a fake bomb,” Ahmed said after being released.

According to the report by WFAA, Irving Police spokesman Officer James McLellan told the station, “We attempted to question the juvenile about what it was and he would simply only tell us that it was a clock.”

That’s because it was. Even after insisting it was only a clock, he was still arrested and charged with having a fake bomb.

Thankfully, both Mark Zuckerberg and President Obama have invited Ahmed to come show their clock to Facebook and the White House. Pretty cool way to help encourage future engineers! Cool clock, Ahmed. Want to bring it to the White House? We should inspire more kids like you to like science. It’s what makes America great.

9th grader Ahmed Mohamed invited to bring his clock to the White House/Facebook
RELATED  The Highs and Lows of Being a Female Tech Leader
Tagged on: ahmed mohamed