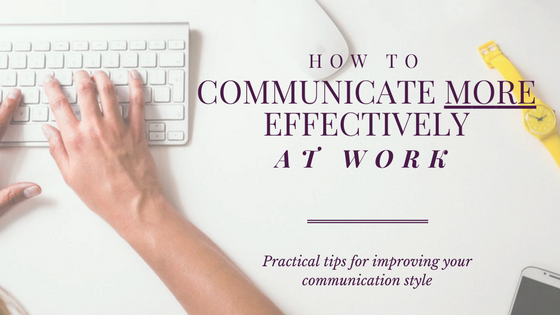 No matter your role within an organization, improving communication with managers, colleagues and direct reports is essential to personal and professional career growth. Improving your own communication style depends on your personality – if you’re more naturally passive, perhaps you need to learn some strategies to be more direct and speak up. Or, if your communication is more direct and aggressive, it might help to learn how to scale it back and learn to listen more. No matter what your background or personality type, effective communication is a skill that should be continually improved through practice and awareness. Here are some helpful tips to communicate more effectively at work.

Put yourself in their shoes

Learning how to put yourself into someone else’s shoes is a great exercise to improve communication and demonstrate high emotional intelligence. Rather than approach others with just what you need, by putting yourself in someone else’s shoes, you can instead see what might be beneficial to them, and how you might be able to help yourself by helping them. This is also a valuable practice for sales or customer facing positions – being able to anticipate and deliver on the real need. It’s also a critical skill for resolving any office conflicts.

Let’s say you and a colleague both brainstormed an idea and your colleague shared the idea in a meeting and the boss loved it – without crediting to you. Perhaps your colleague was just excited for idea they forgot to credit you, or they were concerned the idea might not be well received so thought not mentioning you would not be in your best interest if the boss didn’t like it. Of course, there’s a chance the colleague was trying to take all the credit – which can also happen. Rather than jump to a conclusion – which is usually just a reflection yourself – take a minute to put yourself in their shoes. Does the colleague have a history of taking full credit for ideas or do they share credit after the fact? Once you’ve put yourself in their shoes and better understand their actions as it relates to your past experience working with them and their personality, it will give you an appropriate way to approach them using the other communication tips below.

RELATED  The 10 Disaster Planning Essentials For A Small Business Network

Focus on I instead of you statements

No matter your personality, overuse of you statements can put the other person on the defensive or it may come across as passive aggressive. This advice isn’t just important for work relationships, but for any relationship. Compare “I’m not a huge fan of those color choices, let’s look at some options a bit less bright.” vs “You didn’t choose the best colors, maybe we can see some other choices?” Although both statements convey the same thought – the colors simply aren’t working – the first takes personal responsibility for not liking the colors and gives a remedy – mocking it up in more subtle tones. The second might feel like a direct attack on the designer – and doesn’t offer any real remedy. The same goes for resolving inner-office issues – “Why didn’t you give me credit for the idea in the meeting today?” will put your colleague on the defensive and might damage the relationship. Instead, “Great job pitching our idea in the meeting today – the boss really seemed to like it. I was a bit surprised my involvement wasn’t mentioned, any reason for that?”

Watch your nonverbal communication and tone

Nonverbal communication and tone speaks volumes. No matter how direct your language choice might be, if you avoid eye contact or have you hands in your pockets, you won’t be seen as someone with an opinion worth listening to. On the opposite side of the spectrum, sarcastic tones or eye rolls also won’t help your attempt to be direct – and instead will make you appear like someone who believes their opinion is the best one. If someone proposes an idea in a meeting that you have some issues with, saying in an annoyed tone or with an eyeroll “That will never work with how regulated this industry is” isn’t only not direct, but it doesn’t add anything to the conversation. Instead, use direct language paired with eye contact and a neutral tone. “That’s an interesting idea. I was curious how we would deal with the pretty rigorous industry regulations if we went that route?”

Don’t fluff it up

Being direct is the antithesis of fluff. If you want to be a more effective and direct communicator, it’s important to cut out the non-essential fluff. Most of the time fluff is simply overexplaining a project or giving way too much background – which can be confusing at best. This can also include small talk – if you need an employee or colleague to do an important task, stopping at their desk with several minutes of small talk before asking them to complete the task comes across as unauthentic. However, building relationships is still an important piece of being in a workplace, so try switching things around. Ask for the favor or assign the task first – then ask about their personal life. Not only will this cut out the fluff before the task, it will also make you appear more direct and interested in their life (which I’m sure you really are).

There’s probably a reason why we have one mouth and two ears.  Too many people have the bad habit of not actually listening but simply waiting for their turn to speak. Behavior like this paired with a more direct communication style can make you seem like a bully. It’s impossible to participate in an active and direct conversation if you’re too busy pondering your own ideas, and it will reflect poorly if you propose an idea a colleague just suggested when you were too busy in your own head. Being an effective communicator – and team player – isn’t just about being able to effectively communicate your own ideas – it’s about listening to others and helping to build upon their ideas as well. Have an interview coming up? Try to think of a time when you championed or implemented another colleague’s idea – even when you had a competing idea – and share this. If you can’t think of an example, you might not be as great of a team player as you think you are.

RELATED  Florida still lagging behind when it comes to tech wages

Good communication is the foundation for a strong workplace. What are your favorite tips or exercises to communicate more efficiently at work? Share in the comments below.