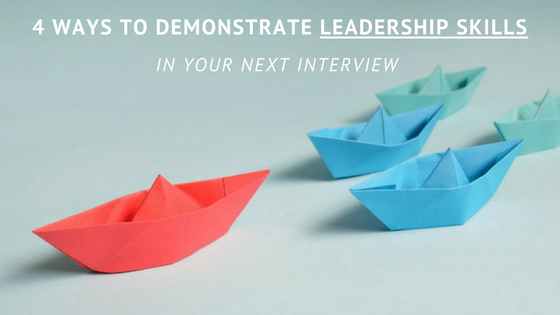 How to Demonstrate Leadership at Work

Whether you’ve held a direct leadership position or not, there are ways to demonstrate that you have strong leadership potential. In many environments, not just in larger organizations, leadership roles with direct reports are going away, and being replaced by cross-matrixed teams. If fact, being able to lead others without having the title is an exceptional skill to have, and something many hiring managers are looking for. Below are four ways to demonstrate your leadership potential in your next interview.

Champion others ideas, especially over your own.

Good leadership isn’t just about getting your own ideas in the spotlight – it’s about recognizing the best idea and making sure it gets fair consideration by the team. It’s not about taking an idea and twisting into your own, it’s about helping another person cultivate their idea and making sure they are recognized with the credit. A good leader always makes sure others receive the credit, whereas a poor leader is always looking for ways to take credit. In your next interview, share an experience working in a team where you showed yourself to be a true team player. Here’s an example: “I really enjoy working with other developers with a goal in mind. It reminds me of a project challenge we did a couple years back at my current company. We brainstormed ideas, and it came down to two ideas – mine and another colleague. We were a bit divided, so took a vote – it was close, and everyone was surprised when I voted for my colleague’s idea. It genuinely was a better idea, and a lot less complex, and our team ended up winning first prize. To me, having a team focused around one idea was more important than having my idea be the one we went with.”

Things go wrong, code breaks, sites go down and clients get unhappy. Yes, there’s often a person that’s at-fault – but chances are the human error was the result of lack of training or communication or even a broken process. Although it may be tempting to simply place the blame on one person and move on, a good leader knows to dig deeper to get to the root cause of the issue and how it can be prevented in the future. There’s an anecdotal story of a manager telling a friend about how a new hire made a mistake and caused a million dollars in damage. The friend asked if the employee was fired and the manager laughed – fired? Why would I fire someone I just spent a million dollars to train? Even if you have never had direct reports, there’s always an opportunity to mitigate the blame, when the issue is with training/communication/process. A hiring manager asks you about your most stressful work situation? Share an example, making sure to place the blame on the root issue or yourself. Something like: “I remember one time we had a critical system go down and a major client lost access to their platforms for a few hours – turns out one of the developers made a big mistake and caused the issue. Honestly, I could have done the same thing because it’s not something we were trained on, so after we rushed to get everything back up, I helped update the training documents to help prevent it from happening in the future.”

A strong leader engages in conversation, not to simply hear their own voice and share their own opinions, but to learn new ideas and perspectives. We’ve been conditioned to feel as though an interview is an interrogation – the person on the other side of the desk asks the questions and we answer, sharing the very best of our accomplishments to try to get them interested in hiring us. A Q&A format doesn’t get a hiring manager excited, and it certainly does nothing to show your leadership potential. Instead, turn the interview into a conversation with high engagement, pulling things the hiring manager said into your replies. Ask him or her about what gets them excited about coming to work, and what work projects felt were their biggest accomplishment. Ask about what their biggest reason for needing to hire or what they view as success in the first six months. If you can uncover why a hiring manager needs to hire, then you can demonstrate with your answers how you can make their life easier. What pain points do they have? Perhaps you say – “You mentioned earlier wanting to standardize the environment, it’s a big challenge, but that was actually my biggest responsibility in my current role. I documented what processes everyone was doing and organized a meeting with the other developers and leadership to come up with a standard process that everyone could agree on. It’s a year later and a lot of the problems we had before no longer exist – and the best part is now that the process and environment is documented, it is really simple to train new hires and they have something to reference when they need.”

Be confident, yet willing to listen to other’s ideas.

There is one thing that can kill any interview and that is over-confidence. Being overly confident is just as bad as being underconfident – hiring managers are looking for someone that can stand on their own feet and make decisions when needed, but they don’t want someone who solely makes decisions focused on their own opinions and biases. I’ve had many candidates think an interview went fantastically, only to be rejected. They can’t believe it, sure there were a couple of things the hiring manager said that they didn’t agree with, but isn’t an interview all about saying all the right things? It’s not, the best hiring managers don’t want a yes-person or a parrot – they want a competent and thoughtful person that brings their own expertise and knowledge to the table. But disagreeing with a hiring manager? Isn’t that a big no-no? Actually, it isn’t, if you do it the correct way. The wrong way? “That’s actually a really terrible way to manage that process – why aren’t you following best practices?” Instead, something like – “I’m curious, why do you manage the process that way? I’ve always thought it was best to follow industry best practices?” This shows you’re interested in learning why they have it set up that way, and keeping an open mind – while also showing that you have potentially different thoughts on how things could be better done. Or alternatively – “A lot of environments are stuck doing things that way since it is a lot of work to implement best practices – I have a lot of knowledge in that space and would love the challenge of taking your environment to the next level if that’s the direction you’re going?”

What are your favorite ways to demonstrate leadership skills? Share in the comments below.