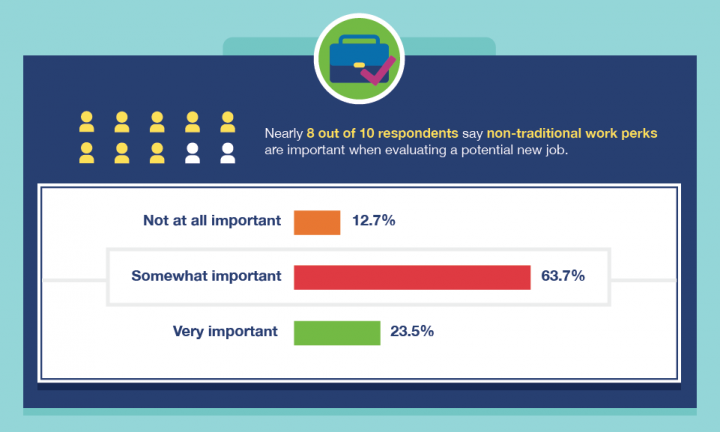 With the demand for tech talent always on the rise, companies are always on the lookout for ways to keep their employees happy and engaged. From on-site gyms to unlimited vacation to company activities, there seems to be an array of options to reward and retain staff. The problem? Your employees don’t always want them.

If you’re hiring smart employees, they’re likely able to figure out that these “free” perks are actually not free. Someone is paying for them, and that someone is your employees, quickly leading to dissatisfaction or unhappiness if they’re denied a bonus or a raise at the end of the year. So, you’re telling me you can afford to have a free yoga class (that I don’t attend) every week but you can’t afford giving me a raise?

This latest survey continues to back up my long-held assertion that employees across industries don’t want fancy perks that keep them AT work, they want perks that allow them to enjoy more time AWAY from work. Instead of free beers after work on Thursday, why not give employees the option to leave an hour early or go out for free beers? I think you’ll find a happier, healthier and more engaged workforce by allowing options and choices.

Here’s the infographic provided by Quill along with their findings:

The Method Behind The Survey:

This survey was designed to find out which employee perks workers are most likely to have, which perks they want most, and which ones they could do without. The 10-question survey, using Google Consumer Surveys, was open to responses on April 4, 2016.

A total of 353 participants responded to our queries. These respondents were divided along the following demographic lines:

This survey is not without its limitations, namely a small sample size. (Given the approximately 144 million workers in America, it would have been tough to poll them all.) Nevertheless, it provides useful insights into the value of on-the-job perks.

Differences Between Age Groups
Studies examining workplace dynamics often analyze how responses differ by age group, and for good reason: Workers from different generations tend to demonstrate different values, needs, communication styles, and long-term goals, so survey results may be misleading if we didn’t take this into account.

In the case of this survey, there were both similarities and differences in the way participants from each age group responded to our questions.

Let’s start with the similarities:

The importance of non-traditional work perks increases slightly for each successive age group, with the oldest age group valuing non-traditional work perks most of all. Still, younger respondents are more likely than other age groups to take action in the face of unsatisfactory job perks: They report a higher likelihood of looking for a new job if their current position didn’t offer the right perks. The middle age group was least likely to look for a new job if they were unsatisfied with the perks at their current one.

Conclusion:
Even though employees may be unlikely to negotiate for more and better perks, it’s clear non-traditional perks are an important consideration for workers choosing between potential new jobs. Regardless of age, employee perks provide valuable incentives that can make or break a person’s decision to take a job—and stay at it.

Survey Says: Perks that promote work-life balance are most desired