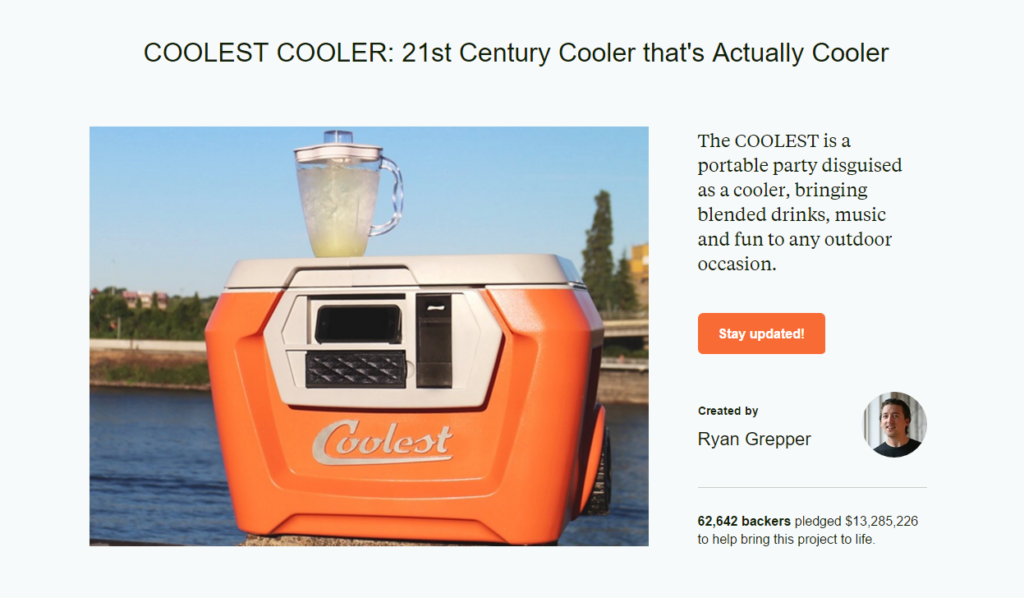 When crowdfunding first made its debut, it seemed like a low-risk way to support budding entrepreneurs and get the newest products before the general public. But what happens when a Kickstarter or Indiegogo campaign is successfully funded but creators can’t deliver. Unfortunately, it’s not good news for backers.

Kickstarter and Indiegogo like to share their success stories and hype excitement. These crowdfunding sites earn a percentage of all money raised without any liability for deliverables – that all falls into the lap of typically inexperienced creators. They profit big when you back projects, whether or not the creators ever ship rewards.

Even some of these crowdfunding sites biggest success stories have trouble or completely fail on delivering rewards. Remember the Coolest Cooler?  The founder raised over $13 million (yes, million) and were supported by 62K people excited to get a cooler with a blender, charging port and speaker Yet, even raising several million doesn’t preclude founders from running into production and shipping issues.   Many of the comments on this project are complaining about not yet receiving the product as of November 2015, one that was estimated to be delivered between October and December 2014. The good news for these backers is it looks like they will be receiving their Coolest, albeit with a year delay, and the founders are very open with any setbacks. And, unlike other projects that are slow to deliver the rewards yet are actively selling the product in stores and online, it appears that if you order the Coolest outside the Kickstarter, you’ll be getting in line along behind or alongside Kickstarter orders.

RELATED  4 Tips on How to Demonstrate Leadership at Work Coolest may be struggling to meet deadlines but they are following up on promises, so what can you do if you back a project and founders aren’t following through? This answer is the dark secret of crowdfunding: nothing.

Backing projects on crowdfunding sites may be toted as a sure deal: pay X amount of money and get Y reward. In fact, when Kickstarter started they required creators to deliver or give a refund. This is no longer the case and likely due to companies simply not having any capital to give refunds. We’re seeing more and more crowdfunding campaigns becoming ultra-successful, raising several million in funding, only to collapse and never deliver. Backers, who may have invested several hundred dollars in an exciting project, likely will never see their money returned. It would seem obvious that you’d get a refund if a founder isn’t able to deliver on their promises. However, by time they spend the cash in R+D, there’s no money left to refund.

Many disgruntled backers out a few hundred with nothing to show for it are calling for class action lawsuits. The problem is that these founders don’t have any money left to go after – they spent it trying to get a product launched unsuccessfully, leaving backers without their money or product

Before October 2014, creators were required by Kickstarter to offer a refund if they weren’t able to fulfill. “Project Creators are required to fulfill all rewards of their successful fundraising campaigns or refund any Backer whose reward they do not or cannot fulfill.” This gave Kickstarter users confidence that if they didn’t get a product they’d get a refund of their money. Not anymore. In 2014, Kickstarter quietly changed their terms and conditions to allow a creator a whole slew of other actions to get them off the hook for refunds. The trend of successfully funded crowdfunding campaigns not delivering is becoming worrisome for backers and creators alike. With no guarantee that you money will get you something tangible, backers should be careful about what they back. And creators are now having to deal with a jilted backer base.

In 2012, the Dragonfly was one of the first crowdfunded projects to net over a million dollars in backer funds. With claims they already had a million in grant money from the US Airforce and convincing prototypes, the excitement surrounding the Dragonfly was palpable. Now, nearly 4 years later, backers still don’t have a product and likely won’t ever receive a refund. Although the team behind Dragonfly isn’t offering refunds, the only thing backers might get would be all the company’s IP with full license to use however needed, including re-sale. With over 3 thousand people receiving this if the company does decide they can’t fulfill obligations (they still have “talks” with others involved to try to remediate), it’s unclear how valuable this information would actually be. Another project, the Pirate 3D printer, actually sells its product in many retail channels, including their website ($799). Yet, over two years have passed and over 60% of early supporters and they haven’t received their 3D printer. In many of the updates for the Pirate 3D, the creators offer for visitors to drop in their office. Yet, they never share their address or any other contact info and has many backers questioning their offer. Thinking about investing in a crowdfunding campaign? Here’s a few tips: