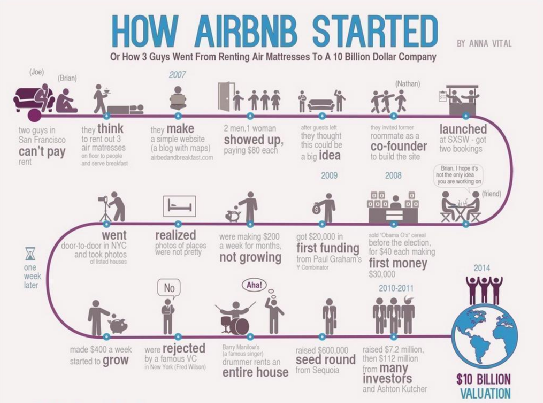 Disrupting an entire industry isn’t easy and certainly isn’t for the faint of heart. The biggest hurtle is disrupting  people’s perceptions and AirBNB is a perfect example of this. Like other now-successful companies, many others didn’t think it would work. For Wikipedia, the founder was ridiculed for thinking people would volunteer to share their knowledge. For Uber, the thought of riding in a strangers car seemed beyond sketchy and not unlike hitchhiking. And for AirBNB, venture capitalists didn’t think people would be keen into staying at other’s people’s homes instead of a hotel. However, AirBnB has proven itself able to disrupt a traditionally brick and mortar industry, but it hasn’t been easy.

When AirBnB first was founded, the idea of staying in someone else’s home was a foreign concept to the majority, especially to those that travel the most and have the most disposable income (AKA Gen Xer’s and Baby Boomers). Some millennials have enjoyed staying at hostels or couchsurfing, but most people simply had no experience or desire to stay with strangers. Many had other privacy and security concerns as well.

As a millennial, I’m not a fan of couchsurfing for the sole reason of not compensating the host. It feels almost too much like an imposition. I prefer the freedom and privacy of a hostel, there’s just something about paying for a place to stay that gives you the feeling like you’re supposed to be there. You also get the opportunity to meet others when staying at a hostel. The problem is that some rural areas either don’t have hostels or don’t have enough to accommodate need and this is where AirBnB comes in. AirBnB quickly appealed to my generation, one that travels to meet others, not just lock ourselves away in the privacy of a hotel. For AirBnB to be successful, they needed the multi-generational support, especially for older travelers since they have the most disposable income. In my experience, when AirBnB was new, older generations didn’t understand what it was or had too many concerns. But they’re beginning to embrace it in a big way.

The first time I told my family members about AirBnB, it was still relatively new. They were skeptical to say the least. They’d never stayed in a stranger’s house. Why would they even want to do that when they could afford a hotel? A year or so later, when they were coming down to visit me in Florida, I suggested AirBnB. They were having trouble finding a hotel in the location they wanted. When we looked at a few AirBnB listings, they finally decided to try it. They loved the concept so much they’re now one of the most successful AirBnB listings in their area, renting out their own house to “strangers” that quickly become friends. You could say they’ve come 360. With positive word of mouth from those in their same generation, many other Gen Xer’s and Baby Boomers now use AirBnB as their preferred lodging option, not to save money but to meet others while traveling.

AirBnB hasn’t just become popular by accident. They’ve worked hard to disrupt and industry and change people perceptions. It’s a great reminder for entrepreneurs everywhere: even if people don’t embrace you at first, never give up.

The tulmulterous life of a startup: AirBNB
Tagged on: AirBnB