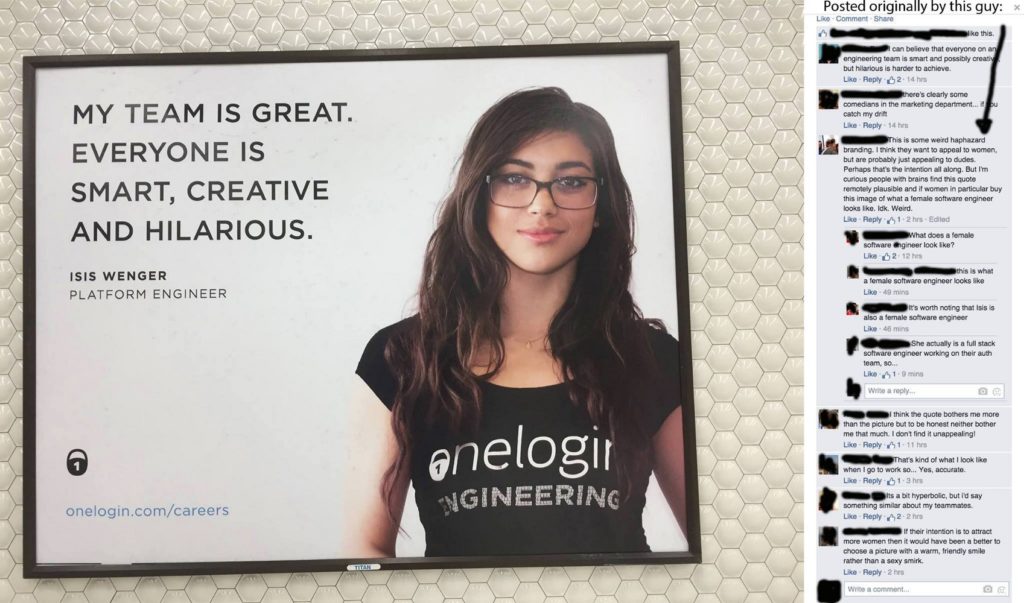 People took to social media to comment on the middle photo of a Platform Engineer, Isis Wenger. Not realizing that Isis is an actual engineer, she received both positive and negative comments, some wondering “if women in particular buy this image of what a female software engineer looks like” or why the photo of Isis showed a “sexy smirk” and not a “warm, friendly smile”. Many seemed to think it was a campaign with a hired model trying to represent a female engineer, maybe to attract men to the company or to glamorize engineering to women. The reality? It was just a photo of a real, female engineer.

“The negative opinions about this ad that strangers feel so compelled to share illustrate solid examples of the sexism that plagues tech,” Isis Wenger “At the end of the day, this is just an ad campaign and it is targeted at engineers. This is not intended to be marketed towards any specific gender — segregated thoughts like that continue to perpetuate sexist thought-patterns in this industry.”

In response, Isis launched a hashtag, #iLookLikeAnEngineer to showcase the many faces behind tech. Check out some of the tweets below.

The woman’s story that should be read by anyone who thinks women can’t be engineers http://t.co/sZVsluCxEq pic.twitter.com/lF2HWiSIsR

#ILookLikeAnEngineer, despite often being mistaken for a marketer, designer, recruiter, or my fav—a girlfriend. pic.twitter.com/fNzhzSQCOr — glitter witch irl (@TessaHarmon) August 4, 2015

I love to code my own Minecraft mods. #ILookLikeAnEngineer and can’t wait to be one someday. #proudmama pic.twitter.com/NihshBXXMJ — Jodi Jahic (@jodij) August 4, 2015

I am a software developer, open source contributor, comics creator, and #ILookLikeAnEngineer pic.twitter.com/RJC70df2BI

I design, build, and test products, and teach others how to as well. You’re damn right #ILookLikeAnEngineer. pic.twitter.com/PLTm6mmy5n — amy eastment (@amyeastment) August 4, 2015

#ILookLikeAnEngineer &some folks even think I’m good at it. Even if I do hang kid pics & like my office to smell good pic.twitter.com/lKXenBUXsn

I am a proud @CODE2040 Alum, @wogrammer, and pursued research to help my principle who had ALS #ILookLikeAnEngineer pic.twitter.com/Gl4SThiryD — Kendell Byrd (@flylikeabyrd22) August 4, 2015

Twitter answers the question of what a female engineer looks like in the coolest way possible
RELATED  25 Worst Passwords of 2014: Is Yours on the List?
Tagged on: advertising tech    female engineers    san fran    tech    women in tech