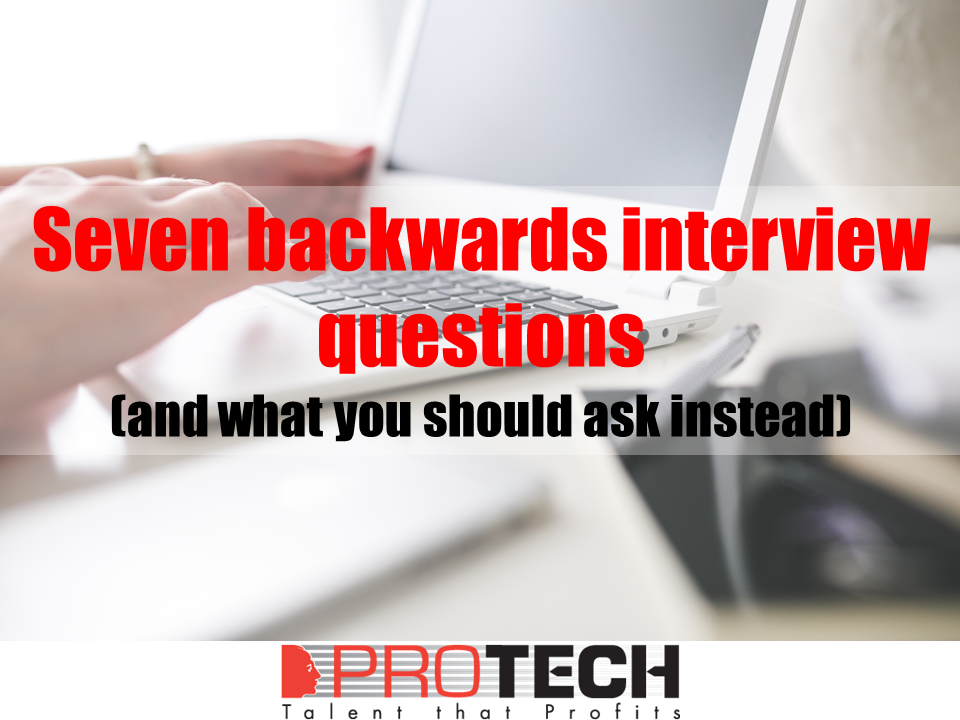 Great questions can be a critical part in making a hiring decision. Hiring the wrong person can cost thousands in training and wages, leaving you with that same old job opening ready to fill again.

How can you turn around your interview process? With the market shifting toward favoring the candidates, companies and hiring managers need to rethink how they approach candidates from the very first interview. A few years ago companies were ‘The Bachelor’ with a whole slew of eager contestants aka job applicants. Now, companies are the ones fighting for the attention of a great candidate. How do you get your candidate to accept your offer instead of your competitors?

What to Ask in An Interview:

Here’s seven backwards interview questions and how to reformat them to win your dream candidate.

Don’t Ask: Why Should We Hire You?

Do Ask: What Are Your Career Goals

Imagine you walked into a grocery store and saw a bunch of bananas. Would you ask those bananas “why should I buy you?” Of course not, firstly because bananas can’t talk, but also because you’re the one with ‘fruit’ on your list and it’s up to you to figure out exactly what kind of fruit you want in your cart.

Clearly this is an off-the-wall example, but why should a candidate tell you, a hiring manager, why they should be hired when they don’t know exactly what you’re looking for other than some job description that may or may not be accurate? Sure they could tell you about how honest and trustworthy they are, and how they get along with others, and how they’re such a hard worker. All of those things are great, but if you don’t have a clear understanding of what you really need, you may hire the hardest-working, most trustworthy person for a job that really doesn’t fit their skills, background or goals.

Don’t Ask: What is Your Biggest Pet Peeve?

Do Ask: What type of people to you mesh really well with?

Asking me about my pet peeves is my biggest pet peeve. Are you expecting candidates to just reveal their true, nasty colors and start talking smack about their boss that expected them to meet deadlines. As if.

Instead, you’ll get a bunch of BS answers that make the person look good. What are they supposed to say? That they get murderous feelings for people that smack food loudly in their mouth? Unlikely.

People respond better to positively framed questions. Ask them who they get along with rather than who they don’t get along with. This will get you’re the intel you’re looking for while making the candidate feel as important as they are.

Don’t Ask: What Makes You a Fit For Our Culture?

Do Ask: What kind of environments do you thrive in?

Are you hiring a psychic? How is a candidate supposed to know what your culture is like and then know if they’d be a good fit?

Unless you can describe your company culture (‘we have a culture where everyone works late with no extra pay, we don’t give annual bonuses, we don’t like it if you take time off and everyone is expected to be at their desk smiling promptly at 8:30 am’) don’t expect a candidate to simply know whether or not they’d be a fit.

Instead, find out what the candidate enjoys when it comes to company culture and compare to your own to see if you believe there’s a match.

Don’t Ask: What Was the Worst Work Environment You’ve ever Been in?

Do Ask: What’s the best work environment you’ve ever been in?

If anyone ever asked me about the worst work environment, I’d automatically assume theirs is terrible and they’re asking to make sure I’ll stick around past orientation day.

Imagine if on a first date the person asks you “what’s the worst someone has ever treated you and you stuck around?” Would they get a second date?

Instead, ask how great they’ve been treated because they’re an awesome person and they deserve to be treated well.

Don’t Ask: What Do You Want to Get Out of This Role?

Do Ask: How Do You See Yourself Growing in Our Company?

Asking a candidate what they’re looking to get out of a role seems like a great way to find out if a candidate is just in it for the money. Don’t fool yourself, a candidate may say they’re looking for job satisfaction or career growth when in reality they’re looking to bring home a paycheck to support them and their family. Our #1 response on our annual talent survey on biggest motivation for taking or leaving a job has consistently been salary.

Rather than get the candidate to make up some silly answer (because again, they haven’t been in the role so how are they do know what they’re going to get out of it other than the guarantee of a paycheck), ask the question a different way. Ask them how they see themselves growing or moving up in the company. Most positions require ambition and if they don’t ever want to move upwards, they’ll stagnate.

Don’t Ask: Why Are You Successful?

Do Ask: What tools and resources do you need to be most successful in this role?

Asking someone why they’re successful is like asking a billionaire how they made their fortune. Either they got lucky (aka won the lottery) or it was a series of small successes and failures along with various tools and resources. The best you can expect is some short canned answer like ‘hard-work’.

Even the most successful person had tools and resources to get them to where they are. Rather than focusing solely on your candidate’s history in success, find out what they need in this role to become successful. After all, do you expect a person to be successful in your new marketing role if you don’t give them a budget? Of course not. This question gets a candidate to stop and think about what they’ll need from the company to guarantee success.

Don’t Ask: What Motivates You?

Do Ask: We offer perks like partial remote, ability to earn extra PTO and yearly bonuses for top performers – would any of those things motivate you?

Asking what motivates someone is usually just a trick question to find out if a candidate is greedy and looking for yearly bonuses and raises. You’re paying them for their hours – that should clearly be enough, right? Nope.

If you’re asking the ‘motivation’ question and praying for someone to answer that they’re motivated by working overtime for no additional pay, you’re going to be hiring a liar, not a great employee. Instead, give the person a real example of perks you give to your employees and find out exactly what they like. This way, when they excel on a task, you can give them a reward without even having to ask.

What are some backwards interview questions you’ve been asked and how would you rephrase them?