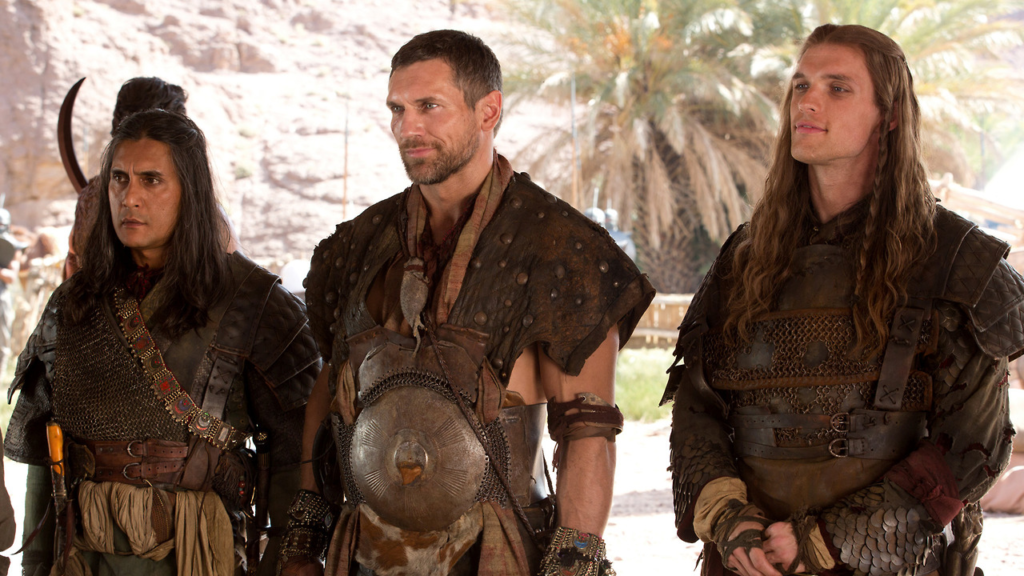 If you’re like most people, you watched the season finale of Game of Thrones on Sunday. If you haven’t seen it yet, and are reading a story about Game of Thrones, you deserve any, and all, very spoilers contained within. Seriously, what were you thinking when you clicked here?! Close this now and watch the show!

Each year, PROTECH conducts a survey of employees and discovers top reasons for employees to leave their employers. Here’s the top responses as illustrated by characters in Game of Thrones.

The largest percentage of employees are mainly motivated by money, just like sellswords. In the 7 Kingdoms, sellswords/mercenaries/freeriders or whatever other name they may go by, have the reputation of not having any loyalty. They’re willing to switch sides for the highest bidder.

Why they quit: Mo’ money. Sellswords are generally easy to win away from a competitor by offering an enticing salary package. Which means it’s only a matter of time before another competitor comes along and steals them away.

How to keep them: You need to give your new hire a reason to stick around beside simply a paycheck. For Tyroshi sellsword Daario Naharis, his loyalty was not bought only by money but also by love. This isn’t an shout out for inner-office romances, instead, it’s a call to action to have great products/services. If your company is proving something your employees can be proud of, winning the loyalty of typically non-loyal sellswords can be possible.

Fun fact, before Dutch actor Michiel Huisman took over in the role as Daario, it was played by British actor Ed Skrein. Ed Skrein was recruited as lead for a Transporter reboot, leaving Daenerys in true sellsword fashion. Go figure.

Lancel was treated pretty poorly by the Lannisters and was expected to work all hours of the day (and night). He was even left for dead at the Battle of Blackwater. Instead of putting up with the abuse from his family, he decided to go after the work-life balance that the Sparrows offered. In this role, he enjoyed being equal to his colleagues as well as other perks like free clothes, meals and even a sick forehead tattoo. Plus, he was not expected to work late evenings when Cersei came calling…

Why they quit: Overworking your employees will get them to not only leave, but possibly become your sworn enemy. And while Cersei arguably won in the end , if you can even call that winning, Lancel seemed to enjoy his new role even if it ended with him as a green vapor.

How to get them to stay: Treating your employees (even if they’re relatives) fairly and as equals goes a long way in retaining long term employees.

Jaime took his dislike for his employer Aerys II Targaryen (aka the Mad King) to a whole other level. This was fueled by the Mad King stashing wildfire under the city and demanding the whole city be burned – which the Mad King thought would turn him into a dragon – and his demands that Jaime kill his own father. Rather than obey, Jaime stabbed the Mad King in the back. “He loved to watch people burn, the way their skin blackened and blistered and melted off their bones. He burned lords he didn’t like. He burned Hands who disobeyed him. He burned anyone who was against him. Before long, half the country was against him,” Jaime Lannister said about the Mad King. Unstable employers come in many flavors, but most of time, if there’s any concern of not having a job in the near future, employees will start seeking new roles.

Why they quit: No one likes an uncertain future. Switching jobs is always a gamble, but when the odds are heavily leaning toward a company being acquired or going out of business, employees will flock quickly.

How to keep them: It’s important not to cause a scare or riot by alienating employees. Cutting pay or stopping paychecks altogether are certain to cause a commotion. If there’s any issues or cause for concern, it’s best to tell employees directly so they don’t turn to the company rumor mill. Also, letting employees know exact timelines and allowing them to take time off for interviewing will allow your employees to leave on good terms and not damage your reputation on the way out. Being massacred on Glassdoor won’t be fun if things work out and you need to hire again.

Of everyone on Game of Thrones, Jon Snow seriously started at the bottom. Believing himself the bastard son of Ned Stark, Jon Snow left Winterfell to join the Night’s Watch with his uncle Benjen Stark. He’s had a tough time as a Black Brother, first being put into a Steward role then having to pretend to be a wildling to survive. After being voted as Lord Commander of the Night’s Watch by a slim majority, Jon faced the backlash of his supposed brothers, eventually leading to his murder. When he joined the Night’s Watch, there was plenty of room to grow, but after being murdered after a short reign as Lord Commander, Jon decided his place was elsewhere.

Why they quit: Hitting a ceiling is tough for anyone, especially if they face bitter resentment from their colleagues. It’s a pretty clear sign you have a toxic working environment if promotions are met with anger and resentment rather than celebration.

How to get them to stay: A revamp of your working environment is required in order to not lose out on valuable talent like Jon Snow. However, sometimes they need to spread their wings and head off to bigger and better things (ahem, White Wolf).

Sometimes a company’s goals and and employee’s just don’t align or the work a company provides just isn’t exciting enough. Arya Stark put in quite the effort in interviewing for the role as a Faceless man, getting all the way to the offer stage. However, it wasn’t quite the right role for her as it didn’t allow her to use her talents for her own revenge purposes. Becoming a Faceless man required Arya to completely lose her identity and only assassinate those in honor of the Many Face God. Unlike many on this list, you could argue that Arya was actually fired instead of resigning her role.

RELATED  Do you need a degree for a job in IT? - Q&A with Hiring Expert Elizabeth Becker

Why they quit (or are fired): Sometimes it just isn’t a right fit and there’s no use fighting their departure; however, compromise can sometimes be reached. If you have an employee that’s exceptional but whose talents aren’t being used to the best of their abilities, it might just be best to let them go on their own way.

How to keep them: It’s tough to keep an employee that just isn’t engaged in the work. These are the type that thrive on having plenty to do and you might try giving them challenging projects to keep them engaged. As Arya demonstrated, sometimes no matter what you do, you’ll lose these types to other opportunities.

Some employees are in it for the perks – decked-out workstations, free snacks and the like. Varys, who grew up as a slave and endured some very rough situations, seems to enjoy his cushy position as the Lord of Whispers. However, unlike most of the Game of Thrones characters, Varys really only cares about the benefits to the realm, and has served several different kings from Targaryen’s to Baratheon’s. His loyalty isn’t just to one king – it’s to whomever he feels can rule it best. He chose the benefits that be believes Daenerys can offer over what the currently-in-power Lannisters offer the realm.

Why they quit: Benefits are important, and they aren’t always in the form of health insurance or paid time off. Varys was arguably getting some pretty sweet benefits by serving the Lannister’s. However, he wasn’t fulfilling his purpose and instead chose a cause he felt more honorable.

How to get them to stay: Offer employees incentives like paid time off to volunteer. Feeling a sense of purpose and having the ability to give back in a positive way is a great incentive to many.

Sometimes employees find themselves in a commute that’s simply unsustainable. For Petyr Baelish, aka Littlefinger, it would have been impossible for him to continue in his Westerosi position as Master of Coin when he picked up and moved to the Vale to marry Lysa Arryn and assume his eventual new job as Lord Protector of the Eyrie and the Vale of Arryn. Of course, he had to first murder said lady first, but that was a small price to pay for control of the largest army in the North. And a chance at Miss Stark’s hand, am I right?!

Why they quit: Limited flexibility. More and more employees are realizing they can do their jobs from anywhere – it’s the time we live in. Yet, many companies have trouble allowing their employees to work from wherever they please showing a lack of trust.

How to get them to stay: If there’s no concerns about loyalty and work ethic, working from home can be a great way to reward top performers and keep them from heading off to faraway lands.

In the seven Kingdoms, the men of the Night’s Watch have enjoyed a cold and harsh working environment for thousands of boring years. Many employees like the simple stability of the Watch, however, for some, it gets to be simply too much and it leads to some looking for something better, even if they might be killed for breaking their vows.

Why they quit: Unless you’re the reborn hero Azor Ahai, deserting the Night’s Watch is punishable by death if you’re caught. That doesn’t stop many from trying, thanks to the cold and harsh conditions at the Night’s Watch paired with strict rules (like not being able to enjoy the company of the local ladies for instance).

How to keep them: If you’re losing a lot of employees, it might be time to consider some of your stricter policies (like not allowing flextime) in order to make the other conditions out of your control more tolerable.

Stannis Baratheon may be one of the best military commanders in Game of Thrones, but due to his tough demeanor and fanatic religious leanings, he discovered firsthand how poor leadership can send employees flocking to the exit. On his way to Winterfell to confront the Bolton Army, Stannis burned his own daughter, princess Shireen, at the stake, causing all of his sellswords (3,000 men) and half of his Baratheon Amy (about 1,300 men and all surviving horses) to abandon him.

Why they quit: Lost loyalty. In burning his daughter at the stake, his army realized that nothing was too big of a sacrifice for Stannis in his desire for kingship. If he would kill his own daughter without shedding a tear, would he care about killing any one of them? When management displays such a blatant disregard for their employees, it causes severe discontent in the ranks. Loyalty has to go both ways.

How to keep them: Treating employees like trusted partners and not as disposable tokens goes a long way in keeping employees happy for the long run.

Elizabeth is the client partner for the tech staffing firm, PROTECH. PROTECH helps companies of all sizes (including startups!) find exceptional tech talent. Looking for a new role or to hire in the tech space? Learn more at http://protechitjobs.com/ or reach her at elizabethb@protechfl.com.

Why your employees are leaving (as illustrated by Game of Thrones)
Tagged on: employee retention    game of thrones    hiring    retaining employees    retention