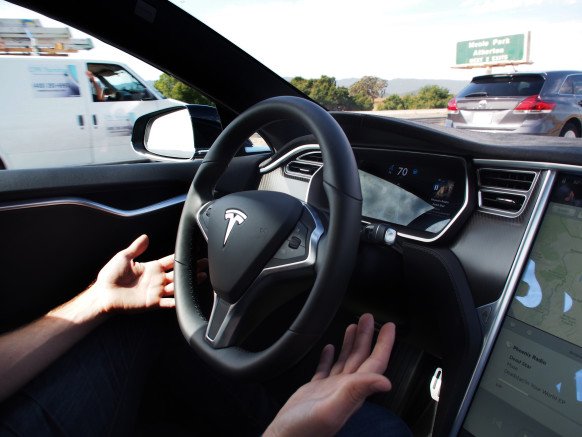 Distracted driving is already one of the major killers of the road. Distraction.gov lists the major causes of distractions as texting, using a cellphone/smartphone, eating and drinking, talking, grooming, reading, using a navigation system, watching videos, and adjusting the sound system. With the rise in self-driving car technology, a new item might just need to be added to the list: sex behind the wheel.

With over 3000 people killed each year (and 400K injured) due to distracted driving, self-driving cars are supposed to make driving more safe. Tesla, Mercedes and Infiniti are on the forefront of semi-autonomous technology, and with all three offering an autopilot setting, online videos are already circulating of owners driving distracted thanks to the car being able to navigate itself. Although semi-autonomous technology is impressive, it’s still not perfect and requires an alert driver behind the wheel to keep an eye on other drivers and other things the car just can’t detect or anticipate. For example, Tesla’s technology is also not perfect on picking up speed limits as this Tesla owner discovered when he was pulled over for speeding and when the car didn’t detect signs to slow down around curves.

Barrie Kirk, of the Canadian Automated Vehicle Centre of Excellence, believes that distracted driving will only increase as self-driving and semi-autonomous cars continue to enter the market. “I am predicting that, once computers are doing the driving, there will be a lot more sex in cars.” Kirk doesn’t believe the distractions will end there. “That’s one of several things people will do which will inhibit their ability to respond quickly when the computer says to the human, ‘take over’.”

Federal Officials in Canada are currently trying to come up with a regulatory framework to govern semi-autonomous and driverless cars. “Drivers tend to overestimate the performance of automation and will naturally turn their focus away from the road when they turn on their auto-pilot,” said a note on the issue, obtained by The Canadian Press under the Access to Information Act.

Current technology available to the public is not intended to be completely self-driving, which is where much confusion may arise. Although Tesla, Mercedes, and Infiniti’s cars take much of the work out of driving, they still require human intervention and attention at all times. Canadian officials are concerned that drivers may get too comfortable behind the wheel, including engaging in sex or other distractions, believing that the car is able to drive by itself without any oversight.

“It really needs to be emphasized that these vehicles are not truly self-driving,” say officials, who predict that fully autonomous cars and trucks are “still a few years away.”

With the rise in self-driving technology, expert warns of more ‘sex in cars’
Tagged on: distracted driving    driverless cars